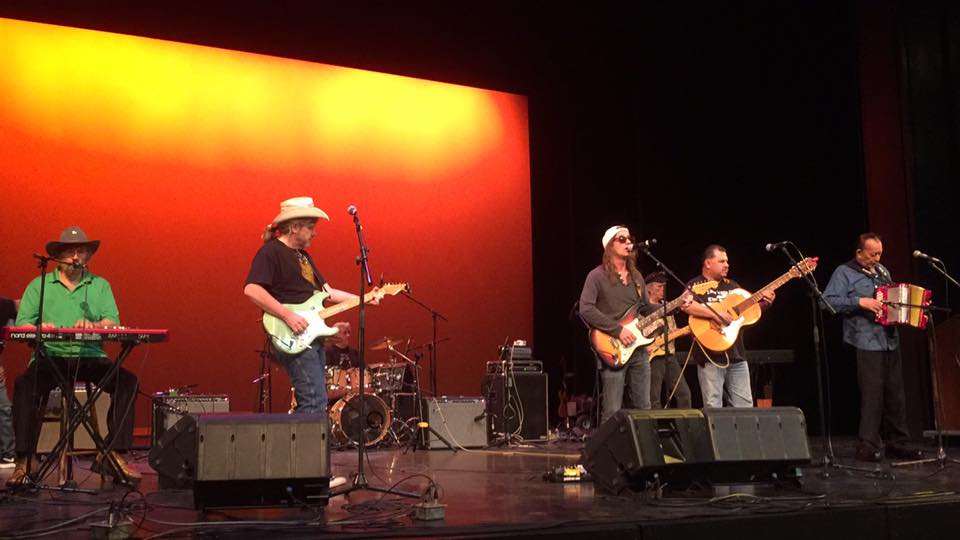 Formed late in 2004 out of a long-standing dream of Pete Stothard the Texas Tornados suddenly hit the country music scene like a ….. well, like a ‘tornado’ really! Within less than two months the circuit was buzzing with reports and recommendations about the exciting new outfit that already had its own fan-base

growing larger as each week passed. By the summer of 2009 not only had they rocketed up the ladder to one of THE most sought-after bands in the UK but they found themselves as nominees for the BCMA “Band Of The Year” awards in September!

On keyboards, guitar, vocals & harmonies there’s a superb addition to the band – Stuart Payne, who has played in the past with many of the big names in Country music (including Circuit Judge, Sidewinder, and the successful Hooked On Country Sold On Sixties Theatre Show) and who has a pedigree in Country music second to none. In gaining a top class player like Stuart the band had not only gained an exceptional talent but it gave Texas Tornados a bright new, lively, younger aged line-up to break yet more barriers.

Although they can hold their own with almost any of the established dance acts they do often play to totally non-line dance audiences with equal success…. as long as it’s Country they’re happy to play, and it’s as simple as that. Pete is a total extrovert, and when the audience is up for fun it’s nothing to see him leap off the stage while he’s singing, join in the dancing, and generally throw all of his (considerable) energy into making sure the audience goes home completely and utterly ‘entertained’ – he doesn’t know any other way – and his nickname of ‘The Cockney Cowboy’ comes from his general manner, outlook on life, and his insistence that life is good… as long as you always give it a helping hand. Be entertained therefore, each and every night, by the irrepressible Texas Tornados and go home with that ‘happy’ buzz afterwards.

Shopping Cart
We use cookies on our website to provide a delicious online experience. By clicking “Accept” or just ignoring this notice, you consent to the use of cookies and agree these cookie notices are a nuisance.
Accept
Manage consent

This website uses cookies to improve your experience while you navigate through the website. Out of these, the cookies that are categorized as necessary are stored on your browser as they are essential for the working of basic functionalities of the website. We also use third-party cookies that help us analyze and understand how you use this website. These cookies will be stored in your browser only with your consent. You also have the option to opt-out of these cookies. But opting out of some of these cookies may affect your browsing experience.
Necessary Always Enabled
Necessary cookies are absolutely essential for the website to function properly. These cookies ensure basic functionalities and security features of the website, anonymously.
Functional
Functional cookies help to perform certain functionalities like sharing the content of the website on social media platforms, collect feedbacks, and other third-party features.
Performance
Performance cookies are used to understand and analyze the key performance indexes of the website which helps in delivering a better user experience for the visitors.
Analytics
Analytical cookies are used to understand how visitors interact with the website. These cookies help provide information on metrics the number of visitors, bounce rate, traffic source, etc.
Advertisement
Advertisement cookies are used to provide visitors with relevant ads and marketing campaigns. These cookies track visitors across websites and collect information to provide customized ads.
Others
Other uncategorized cookies are those that are being analyzed and have not been classified into a category as yet.
SAVE & ACCEPT